A few weeks after the racist pogrom of Lichtenhagen happened first attempts to create a permanent place of remembrance have been made. 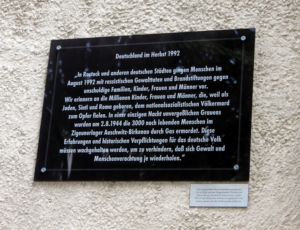 The organisation called Association des Fils et Filles des Déportés Juifs de France placed a commemorative plaque at Rostock’s town hall on 19th of October 1992. That is how they expressed their solidarity with the attacked Roma who have been threatened with expulsion due to the German-Romanian “readmission agreement”.

“Germany, don’t forget history” and “Gassed back then, today deported” was written on banners which participants of the demonstration hung out of the town hall’s windows after getting into the rooms of the Christian Democratic Union of Germany.

The city of Rostock had the commemorative plaque removed shortly after. In context of the pogrom’s 20th anniversary in 2012 a replication of the plaque has been placed at the town hall again – initiated by the “Association of Persecutees of the Nazi Regime/Federation of Antifascists”. Three months later the plaque has been stolen by neo-fascists who left the slogan “Forever Germany” written there. In December 2012 the commemorative plaque was re-inaugurated.

Until 2012 activities for memorization and contention emerged mainly from civil intitiatives as well as culture, media and science. With educational projects, public events, movies, exhibitions, demonstrations and publications it has been possible to organise remembrance of the pogrom and enable a debate about consequences to date. 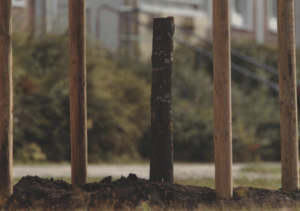 The sawn off oak

The various perspectives on the event perceive an appropriate commemoration very differently. This has been shown in 2012 on the occasion of the 20th anniversary as well. While the city of Rostock held a big rally under the motto of “Lichtenhagen moves” in front of the Sonnenblumenhaus – where then federal president Joachim Gauck gave a speech – more than 6,500 people were demonstrating at the same time under the motto of “The problem is called racism – boundless solidarity” through the city.  A so called “peace oak”, which has been planted in front of the Sonnenblumenhaus as a sign of remembrance by the city of Rostock, was sawn off by left-winged activists a few days after. They stated that the oak as “a symbol of Germanism and militarism” could not be a worthy reminder of this kind of racist pogrom.